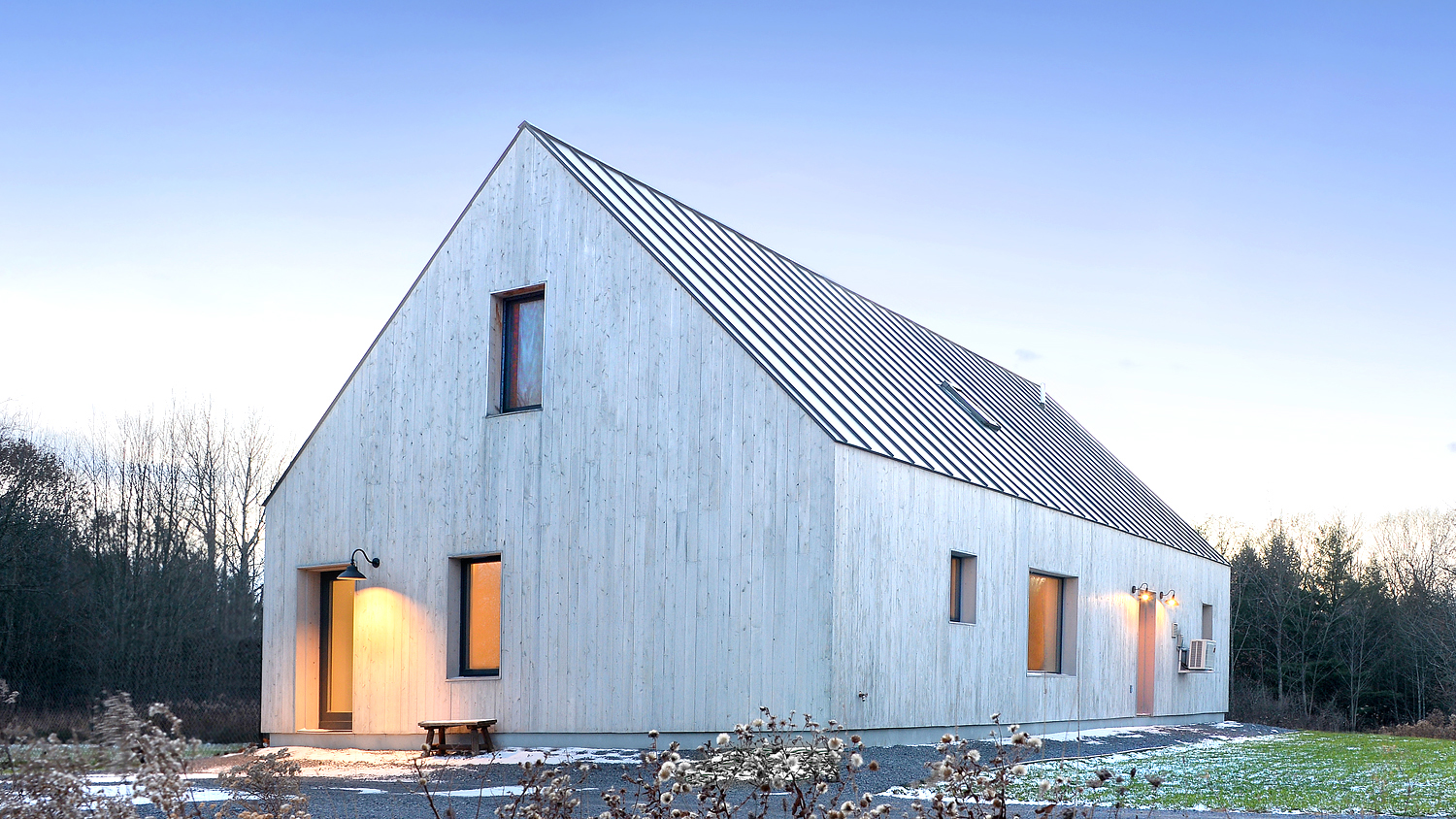 SEARSMONT, ME AND MILFORD, PA

The first RPA|Ecocor home is owned by Elizabeth Scott, a jewelry artist who grew up in a “Post and Beam Passive Solar House” that her parents built in 1979 with legendary builder Bruce Brownell, a pioneer in low energy residential building. Spending her childhood in a home that took advantage of solar gains using a wall of windows and featured twice as much insulation as a typical home, Elizabeth always knew that she would one day own an energy efficient home of her very own. She eventually learned about Passive House and originally planned on building one in 2009, but, after realizing there were limited options available in the United States, she decided to wait until building methods improved.

RPA|Ecocor are committed to delivering their client’s dream Passive House, and Elizabeth worked with RPA to customize the home to her exact preferences.

“After growing up in my parent’s passive solar house, I always felt that it was too bad that the passive solar building technology did not develop further in the United States, until recently,” said Elizabeth. “I was ecstatic to find that RPA|Ecocor’s Solsken Line of prefabricated Passive Houses employed 21st century building technology and quality materials, like foam-free, dense packed cellulose insulation. I was even more convinced that it had been worth my wait when I began working with RPA to customize the design of my home.”

Her original plan was to build a small 800 square foot Passive House along with a detached building to be used as her workspace, but after consulting with RPA|Ecocor, Elizabeth decided that the “Goldenrod” model from the Solsken Line was more practical and a better investment. Elizabeth’s Passive House will be assembled on an 8.7-acre lot adjacent to the 23-acre lot where her parent’s Post and Beam Passive Solar Home sits.

RPA|Ecocor are committed to delivering their client’s dream Passive House, and Elizabeth worked with RPA to customize the home to her exact preferences. The Goldenrod model features two bedrooms and two bathrooms, but Elizabeth desired more living space in addition to a workshop where she can create her jewelry. To expand design options and cost-effectively increase living space, the team decided to add the Ecocor Passiv Roof assembly to Elizabeth’s home. The Ecocor Passiv Roof employs the same healthy, high performance materials as the Ecocor Passiv Wall, and runs along the pitch of the roof, reclaiming living space typically dedicated to the attic. Elizabeth’s customized Passive House is one and a half stories and features four bathrooms and three bedrooms.

“Elizabeth was Ecocor and RPA’s ideal first customer,” said Chris Corson, founder and technical director of Ecocor. “Her passion for a modern high performance home was apparent from the first time we sat down, and she showed an eagerness to work with us to ensure that RPA|Ecocor delivered her perfect Passive House.”

From the initial design contemplation to completion, RPA|Ecocor expects the entire process to take six to eight months. Elizabeth worked with RPA over a six-week period to customize her home. From there, RPA’s computerized building models automatically provide instructions to the Randek AB saw and production line inside the Ecocor facility, where the panelized wall and roof components are created, a four to six-week process. Once fabricated, the panels will be loaded onto trucks and shipped to the site which has been prepared for assembly. Upon delivery, RPA’s design team and Ecocor’s construction crew will work with local building partners to assemble Elizabeth’s Passive House – about a two-week process.

After Ecocor and the local building partners set the panels and install the roof, the home is weather and air tight, and at this point, Ecocor will perform a blower door test to ensure that the new home meets the rigorous Passive House air tightness standard. The home is then ready for the local builder partner to take over, installing the mechanical, electrical and plumbing, as well as the interior and exterior finishes. Elizabeth expects to move into her new RPA|Ecocor prefabricated Passive House in the Spring of 2017.

About Ecocor
Ecocor is a construction firm that designs, manufactures, delivers and assembles high performance buildings throughout North America. Ecocor’s patent pending foundation and wall designs reduce energy consumption for heating and cooling buildings by 80-90%, which substantially reduces the cost of ownership and the building’s carbon footprint, while increasing the comfort of its owners. Using panelized building components as a construction platform, Ecocor has better control, higher quality and much shorter time-to-occupancy than any site-built construction. Learn more at http://www.ecocor.us/.

About RPA
Richard Pedranti Architect is an innovative architecture firm located in the heart of the Upper Delaware River Region specializing in environmentally conscious building strategies. The firm is distinguished by its proven ability to create beautiful buildings that achieve the rigorous Passive House standard. Combining intelligent modern design and 21st Century building standards, RPA creates simply extraordinary places that exist in harmony with the environment and fulfill the unique aspirations of each client. To learn more go to https://richardpedranti.com.