For a Lake View, They Built on Stilts

It’s a Sunday spring morning. Colin Dickerman, Peter Koblish and their two pit bulls are, at last, spending it in their house in upstate New York, overlooking a lake and the woods where one dog recently got impaled by a porcupine. On the coffee table is a manuscript – probably soon to be available in bookstores near you. Dickerman, a book editor, was working on it when we pulled in. He’s in a blue jean shirt, and Koblish is wearing a red flannel shirt with beige elbow patched and thick rimmed glasses. The entire scene is a picture of a Sunday out of the city.

They decided to raise the house up on piers, to “float it over the landscape,” said Pedranti. Stilt houses are catching on, and not only in flood zones. “I just always wanted to do a house like that, and now we’re doing more of it,” said Pedranti.
The couple had just moved into their weekend retreat couple weeks before. They were still getting the hang of certain things, like how much freedom to give the dogs. They bought eight acres of raw land here two years ago, after city friends who weekend across the lake proposed the idea. They’d been working on it pretty much every weekend since.

“We had to blow up the entire forest to put in the driveway, water, septic. That was fun,” said Koblish, sarcastically. He’s the creative director of advertising for a luxury retailer headquartered in the city.

“Don’t say ‘blow up,’” said Dickerman. “It sounds terrible.” The work was “minimally invasive,” he proposed.

However you put it, it’s no small task to clear wooded land for a new house. But all the older houses they looked at were either right on the road, or needed renovation, or would cost a fortune to heat. The couple looked through listings of local architects and found Richard Pedranti, renowned for his passive houses, which are tightly insulated and positioned to take advantage of the sun’s heat.

The three of them spent a lot of time walking the sloping property, figuring out where the house would go. Four or five times, Pedranti staked out the outline of the house, moving it a couple feet to see how it would relate to the landscape.

“When we were first here we could hardly see lake,” said Dickerman. Now they have a full panoramic view, thanks to their elevation and some “limbing up,” or pruning, of the white pine forest. The meadow is seeded with blue and white wildflowers, which had yet to come up when I visited in late April.

They decided to raise the house up on piers, to “float it over the landscape,” said Pedranti. Stilt houses are catching on, and not only in flood zones. “I just always wanted to do a house like that, and now we’re doing more of it,” said Pedranti. It’s a win-win-win: not only does the house have the cozy feel and commanding views of a treehouse, but it’s easier on the landscape and on the wallet, since you don’t have a foundation.

The house is open and simple, a long rectangle whose long south-facing side juts out a bit in the living room, so that you almost feel like you’re outside when you stand in front of the picture windows. This is where the dogs like to press their noses against the glass and keep tabs on the action.

The triple-paned tilt-turn windows seal up super tight, but can be opened in all sorts of ways to let in a breeze, say, but not the rain. These state of the art windows were designed in Europe, but these particular ones were actually made in Albany. Pedranti’s focus on using regional materials is apparent everywhere, in the thick planked white pine floors from an old family mill in Pennsylvania, the Vermont slate kitchen floor. 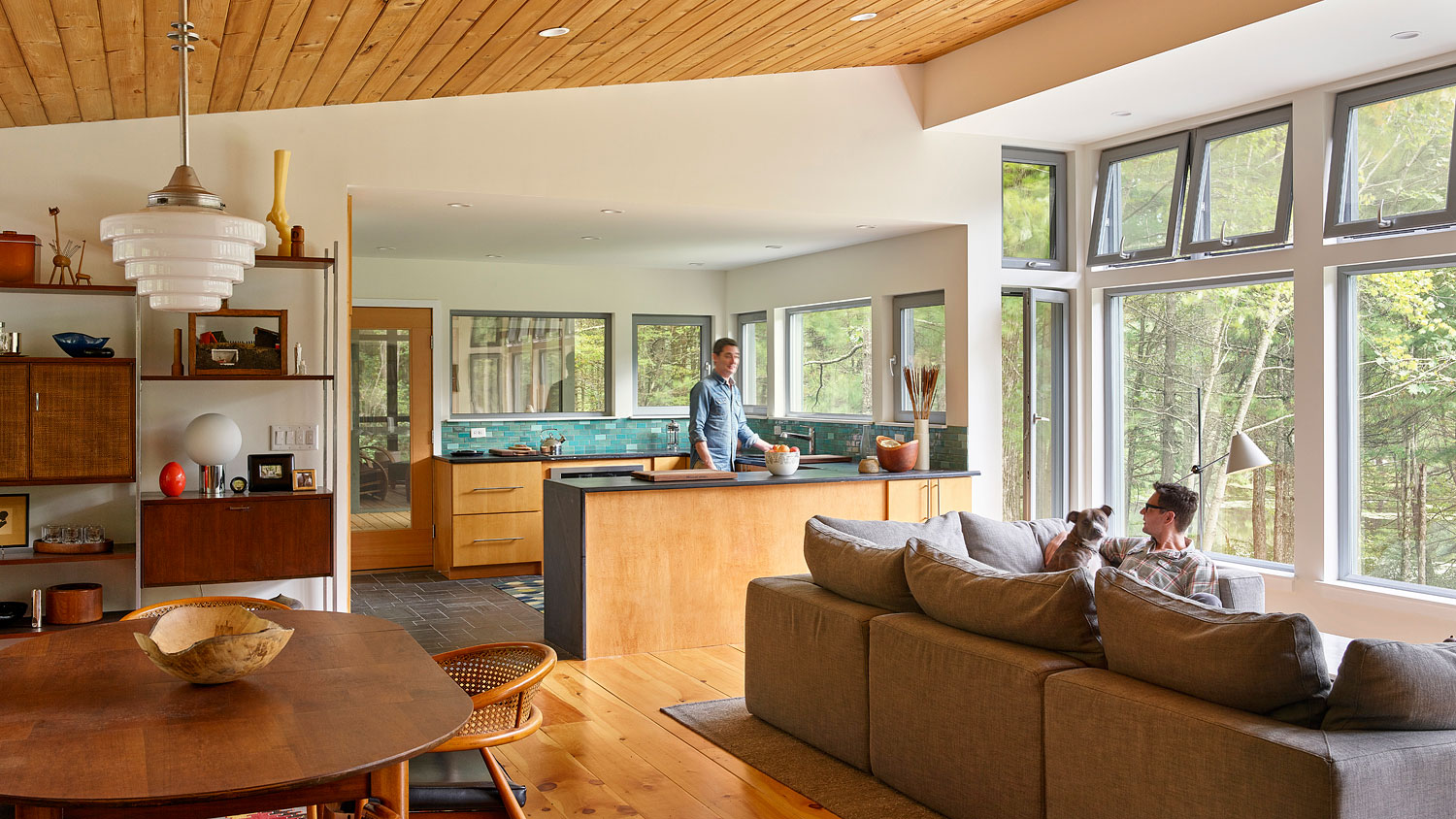 Because it’s surrounded by dense woods, the house can’t be purely passive solar, but its heating and cooling system is minimal. There’s a fireplace, too, although they’re tough on energy efficiency. “Generally I try to talk clients out of it,” said Pedranti. But Dickerman had his heart set on an open flame, so they went with a fireplace with a glass door, which keeps heat from escaping when not in use.

Off the living room is Dickerman’s office: a writer’s nook with a day bed, a wall of hardcovers with bright, inviting spines, a shag area rug and a desk looking out over the lake. The couple filled Pedranti in about how they like to spend weekends, and he designed accordingly.

The house is set up for entertaining, with the lion’s share of its 1,800 square feet given to communal spaces. The first gathering room, though, is actually the porch. A lot of thought was given to the transition between outdoors and indoors. “It’s meant to happen in an easy way,” said Pedranti.

At first they talked about a bridge entrance, but at the end of the day decided to keep it simple, with a wooden floor that you walk on, up a few shallow steps, onto a covered porch with a creek running underneath and two chairs facing the lake. The lowest section of the porch floor is cut away to fit snugly around a giant pre-existing boulder.

It sounds like the porch has seen some festivities already. Dickerman reported that he had fallen down these stairs not once but twice, and a friend had also missed a step and gone tumbling. There should probably, he told Pedranti, be a colored stripe on the edges of the steps. With a wood-fired cedar hot tub in the works, and a path being planned down to the lake, this house is made for summer parties.