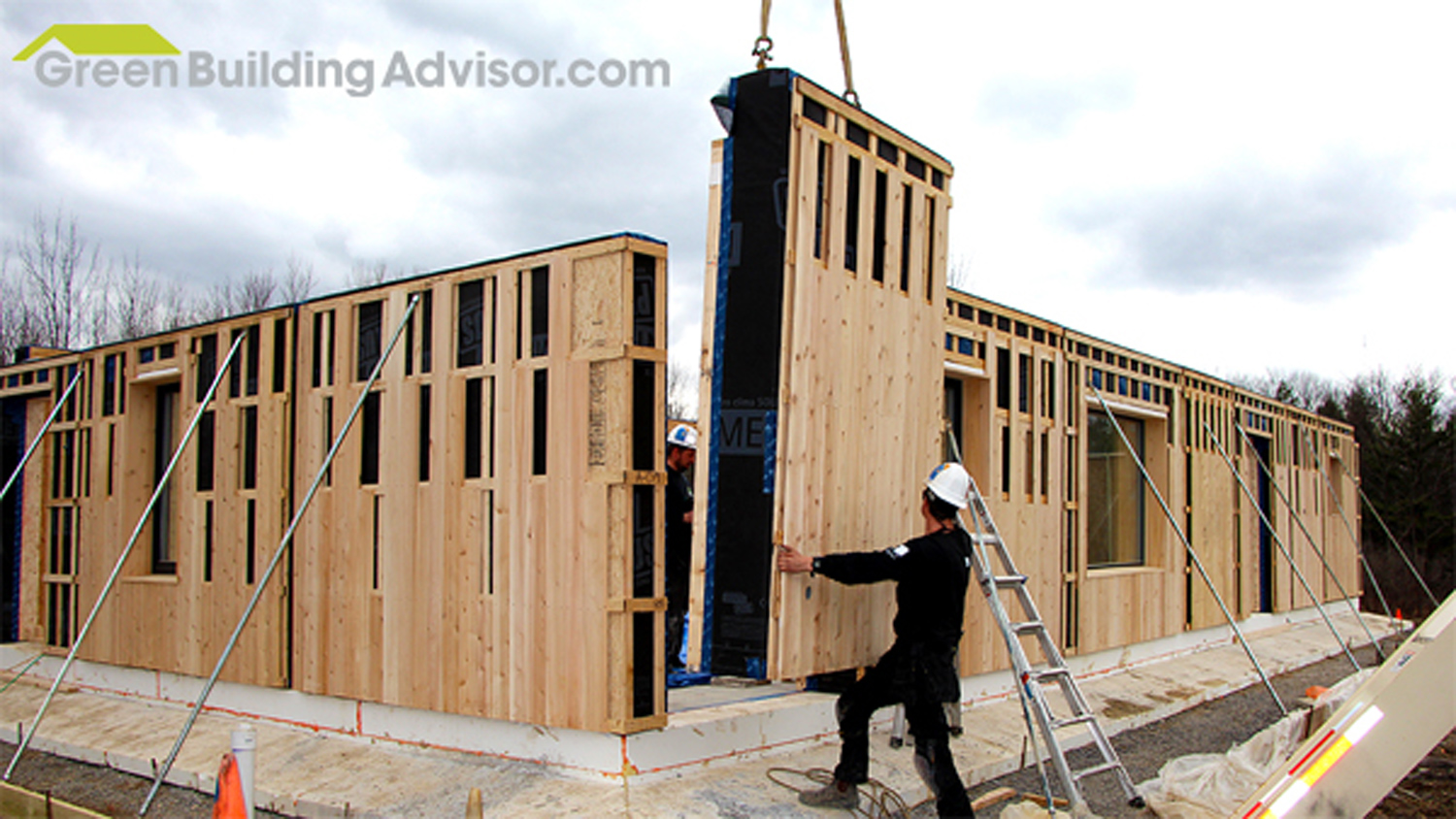 A house is assembled in New York from panels manufactured in Maine, while Phoenix Haus in Detroit moves into high gear

A crane lowers a prefabricated wall section into place in Altamont, New York. It’s the first in a line of panelized homes from a Pennsylvania-based architect and a Maine components manufacturer designed to meet the Passive House standard.

It took four carpenters and six crane days to assemble Elizabeth Scott’s new house in Altamont, New York, and when they were finished the partnership of Ecocor and architect Richard Pedranti had reached an important goal for their new line of “Solsken” Passive House prefabs.

The wall and roof assemblies were built in Ecocor’s Searsmont, Maine, assembly plant using Pedranti’s design. The 2,215-square-foot house, a modified Goldenrod model home, is one of 11 designs posted at Ecocor’s website and the first of the Passive House homes to roll off the production line.

Ecocor said that the house is the first in the U.S. to be manufactured with Randek equipment from Sweden, and it will eventually be submitted for certification through the Passivhaus Institut of Germany, and possibly with the Passive House Institute U.S. as well.

Ecocor founder Chris Corson said by email that an initial blower-door test was scheduled March 16. It will be up to the homeowner and the local general contractor on the job to complete the home, but judging from an earlier project the house could be ready for its new owner in as little as two months.

It’s an important milestone for Ecocor, but the company is not alone in building Passive House-certified components for panelized houses. In Detroit, a company called Phoenix Haus is using the same tooling and similar materials and techniques to produce its own panelized Passive Houses.

Ecocor’s wall and roof sections are built with the help of computerized equipment that turns Pedranti’s architectural drawings into cutting lists that can be fed into the sophisticated Randek equipment at the Ecocor plant. Panelized parts, made with a combination of I-joists and dimensional lumber, are air-sealed and then insulated with dense-packed cellulose before they are trucked to the site for assembly. Once the house is put together, it still needs interior work, including more insulation, siding, and roofing.

The Ecocor-Pedranti partnership publishes prices for their houses online. The smallest of the model homes is 323 square feet and sells for $140,000 in Maine. (The tiered pricing schedule calls for higher prices in New England, the Mid-Atlantic region, and then the rest of the country.) The most expensive is a 2,230-square-foot home that costs $525,000 in Maine, and more elsewhere.

Customers can start with a model home and work with Pedranti on modifications, as Scott did. Ecocor said that Scott originally planned on an 800-square-foot house with a detached workshop, but then opted to work with Pedranti on an expanded design.Ecocor said that the house is the first in the U.S. to be manufactured with Randek equipment from Sweden, and it will eventually be submitted for certification through the Passivhaus Institut of Germany, and possibly with the Passive House Institute U.S. as well.

The house is built on a frost-protected shallow foundation completed by an Ecocor crew. Altamont is a community of about 1,700 people west of Albany, New York. Scott is having the house built on a lot next to her parents’ passive solar house built in 1979 by Bruce Brownell.

See this article on http://www.greenbuildingadvisor.com/blogs/dept/green-building-news%2A#ixzz4e8sbRR8k.