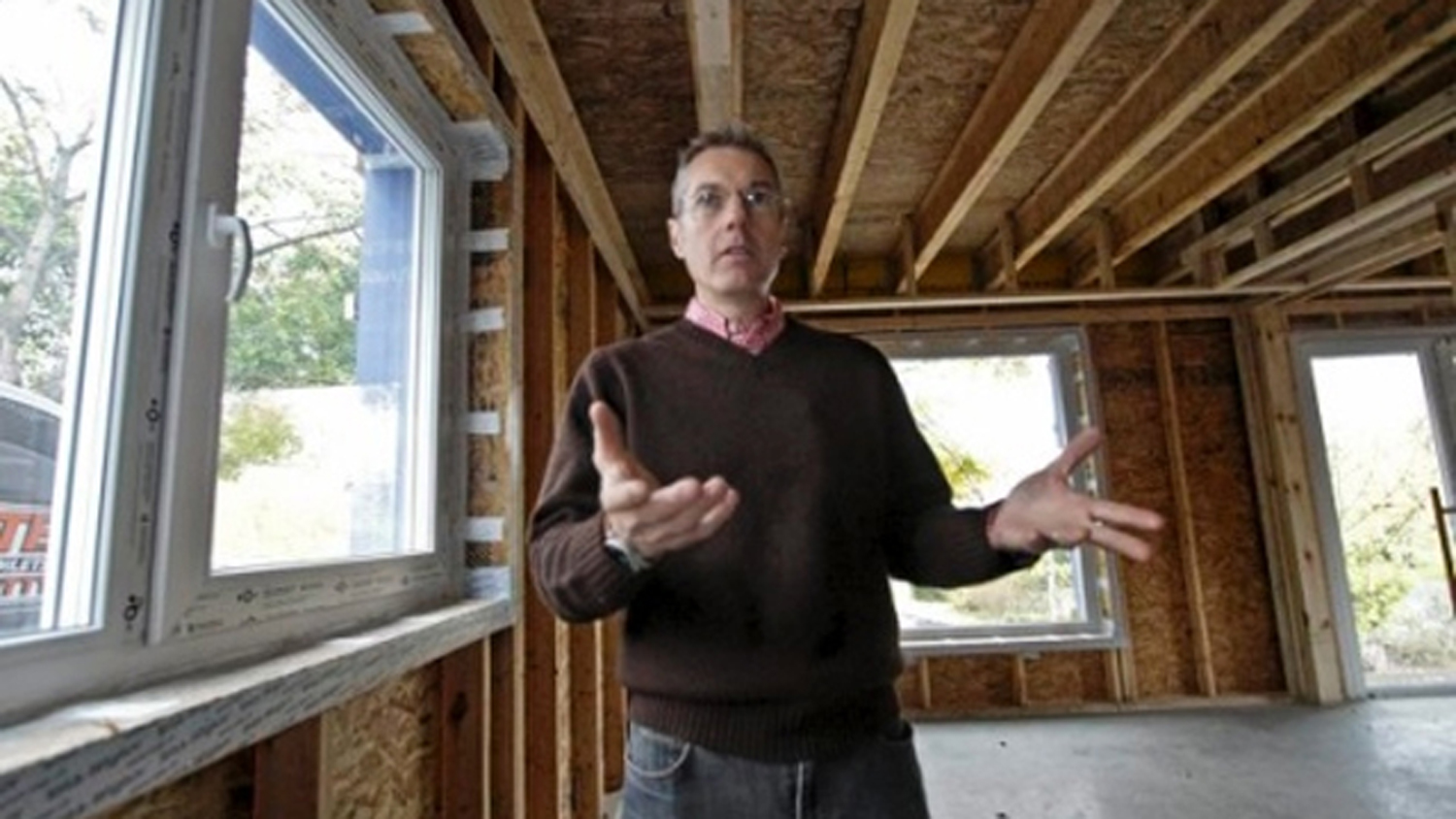 U of S Profs’ ‘Passive House’ will Slice Energy Bills

Their house might be passive, but it took an active interest in efficient, environmentally friendly living to begin making it a reality. Architect Richard Pedranti, designer of the first “passive house” in Northeast Pennsylvania, stands inside the dwelling at 1700 Pine St. in Scranton that will use 80% less energy than typical homes.

The lot at the corner of Pine Street and Wheeler Avenue in the city’s Hill Section sat empty. University of Scranton physics professor Declan Mulhall, Ph.D., often noticed it as he walked by.

He and his wife, Scranton psychology professor Christie Karpiak, Ph.D., both 44, decided to buy it. Then they approached Milford-based architect Richard Pedranti to build a highly energy-efficient home, known as a passive house.

Now, construction is well underway for what Mr. Pedranti says will be Pennsylvania’s first residence certified by the Passive House Institute U.S.

Dr. Mulhall and Dr. Karpiak currently live in a century-old duplex on Monroe Avenue, which they thought would be too difficult to retrofit for energy efficiency. When they realized they could afford a new place, they put plenty of thought into their future home.

Above all, Dr. Mulhall didn’t want what he called a “McMansion” with a formal dining room, sitting rooms and other “useless space.” Triple-pane windows and high R-value insulation are used in the construction of the house. The house’s heating and cooling bills should be about $200 to $300 per year.

“You don’t need any of that,” he said. “You just need a house that you can have a life in.”
On a tour Friday, Mr. Pedranti said the passive house is three times more energy efficient than a typical new home. When it is complete, heating and cooling bills should only run $200 to $300 per year, he said.
A series of simple but effective building techniques and technologies make it possible.

The first floor will hold a kitchen, living room, office and half bathroom. Three bedrooms, two bathrooms, a den and a hall closet will occupy the second floor.

The only rooms it is missing are an attic and basement, “which are essentially places your garbage goes to wait 40 years before it goes to the garbage,” Dr. Mulhall said.

The keys to high efficiency are insulation, air-tightness and air circulation, Mr. Pedranti said.
“The important thing there is you have continuous air flow in the whole building,” he said.

When the home is complete, a RenewAire EV200 heat recovery ventilator will draw fresh air from outside and pre-heated or pre-cooled air from indoors. Construction of the house used a Solar Pathfinder to optimize the house’s efficiency.

As the two air streams pass each other in the unit’s core, heat will transfer from one stream to the other, heating or cooling the outdoor air before it enters the home. The family can add a little extra heat or cooling using a small electric unit.

In a poorly insulated, leaky house, much of the heat or cold gained in this air transfer would be lost.
That’s why they installed thick layers of blown cellulose insulation, mostly made from shredded and ground old newspapers, between the walls, Mr. Pedranti said.

Below the 6-inch concrete floor, an 8-inch layer of perlite and a foot of expanded polystyrene (used in foam cups and plates) stop heat loss through the floor. Above, the ceiling holds a 2-foot layer of blown cellulose for the same purpose.

The hardest part, according to Mr. Pedranti and contractor Rob Ciervo of Ciervo and Sons Renovations, was making the home airtight.

The concept is like “nothing we’ve ever dealt with,” Mr. Ciervo said. All the wood had to be cut perfectly, with all the frames precisely plumb and level. A blower door is used to test air infiltration inside the dwelling.

To test for leaks, they had to rely on a blower door, a fan that fits over a doorframe to create pressure changes in the house.

As the blower door pressurized the house, Mr. Pedranti set up a fog machine inside. When the smoke drifted a certain direction, they knew they’d found a leak. They patched them with foam and vinyl tape.

While making a house airtight is almost impossible, they were able to cut down the number of leaks so if they were added together, they would only be the diameter of a softball, Mr. Pedranti said.
A typical new home’s leaks would add up to the diameter of a large trash can, according to Art Smith’s book “Building Today’s Green Home.”

All this combined gives the house a home energy rating of 32, Mr. Pedranti said. The lower the score, the more efficient the structure is. A typical new home scores 100, he said.

Installing solar panels or other renewable technology would bring it all the way down to zero, he said. Dr. Mulhall said they hope to do so in the future.

The house at 1700 Pine St. is open to the public for tours Saturday and Sunday from 11 a.m. to 2 p.m.
Contact the writer: bgibbons@timesshamrock.com, @bgibbonsTT on Twitter

Read this article online at The Times Tribune.